Just yesterday I received my award for the first place in the World Press Cartoon contest for the «gag cartoon» category!!!

I want to say a big «thank you» to the organizers of the competition and especially to Antonio Antunes for the amazing work!!!!

A caricature of Boris Johnson, by the German author Frank Hoppmann, deserved the distinction with the Grand Prix of the 15th edition of WORLD PRESS CARTOON, the great annual event of humour design in the international press. First prize in the respective category, the design was published in the German online newspaper Eulenspiegel, in October 2019.

Among the caricatures, the jury awarded the 2nd prize to Jair Bolsonaro, by the Mexican Darío, published in the Spanish newspaper Mundiario. The 3rd prize went to Christine Lagarde, from Portuguese Pedro Silva, published on the Dutch cartoons platform Cartoon Movement.

In Gag Cartoon, the 1st prize was awarded to the Greek Georgopalis, for Message in a Bottle, the 2nd prize went to Populism, by the Nicaraguan Px Molina, and the 3rd prize distinguished New World Leaders, by the Croatian Listes. Cartoons published by Real News, Confidencial and Buduàr, respectively.

In the category of Editorial Cartoon, the 1st prize was awarded to the Turkish author Aytos, for World Politics, published on the Dutch cartoons platform Cartoon Movement. The 2nd prize went to Xi Jinping Tatoo, by the Brazilian Cau Gomez, published in the Brazilian newspaper A Tarde. The 3rd prize was awarded to the Greek artist Kountouris, for Life Vests and Yellow Vests, from the pages of the Greek newspaper Efimerida Ton Syntakton.

The best works competing for the World Press Cartoon 2020 are on display at the Cultural and Congress Center of Caldas da Rainha, Portugal, with free entry, until November 15. 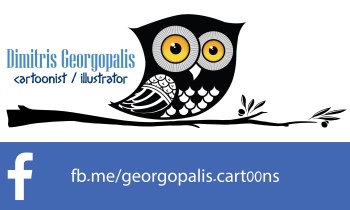